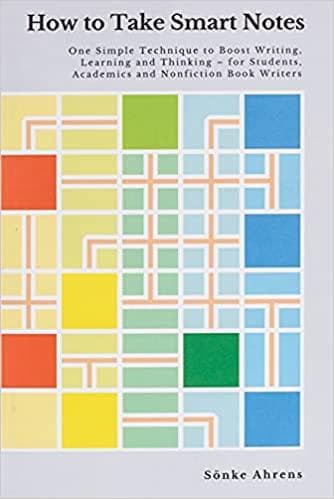 How to Take Smart Notes by Sönke Ahrens

If you've heard the term 'Zettelkasten' flying around recently, then you might be wondering what is all the rage. Well, this book pretty much started this trend. Sönke Ahrens (author of this book) describes in great detail the note-taking process through which Niklas Luhmann was able to achieve phenomenal productivity in writing academic papers. The good news is that you can use this method too. I strongly recommend this book to most people.

The Zettelkasten system can help you become very productive when it comes to publishing written work.

The protagonist of this book is Niklas Luhmann a German Sociologist. He is considered one of the most important social theorists of the 20th century. The reason he is the main hero in this book is his note-taking (Zettelkasten) system. This system helped Niklas publish 50 books and over 600 articles.

This is a rough outline of a Zettelkasten process

Zettelkasten system will help you avoid the blank page syndrom.

1  Everything You Need to Know

2  Everything You Need to Do

3  Everything You Need to Have

5  Writing Is the Only Thing That Matters

THE SIX STEPS TO SUCCESSFUL WRITING

11.4   Adding Permanent Notes to the Slip-Box

12.4   Assemble a Toolbox for Thinking

12.5   Use the Slip-Box as a Creativity Machine

13.3   Getting Things Done by Following Your Interests

13.5   Becoming an Expert by Giving up Planning