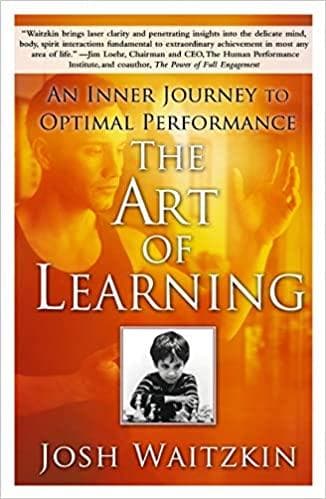 The Art of Learning by Josh Waitzkin

Fantastic book. I enjoyed reading it a lot. It feels a little different from the other books we read nowadays. Most (non-fiction) books are filled with facts and arguments to support those facts. In this book, however, Josh takes us on a journey of a lifetime, literally. We get to see how Josh was like when growing up and becoming a chess master, all the way to his adulthood where he was mastering the art of Tai Chi. Through those stories, we get to learn what does it take to become a great learner.

I'm not saying this book is unique in the sense that we get to hear stories (there are many autobiographies out there), but rather that the way Josh tells those stories. There are parts in this book that I couldn't stop reading and was just consumed by the story that was happening. To those who have read the book, I'm referring to the puma store. Still is stuck with me.

PART I THE FOUNDATION

CHAPTER 5 THE SOFT ZONE “Lose Yourself”

CHAPTER 14 THE ILLUSION OF THE MYSTICAL

PART III BRINGING IT ALL TOGETHER

CHAPTER 15 THE POWER OF PRESENCE

CHAPTER 16 SEARCHING FOR THE ZONE

CHAPTER 19 BRINGING IT ALL TOGETHER